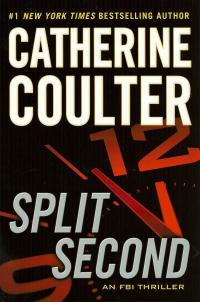 Amazon.com
Kindle
Barnes and Noble
Books-A-Million
Indiebound
iTunes Books Apple Books
A serial killer is on the loose, and it's up to FBI agents Dillon Savich and Lacey Sherlock to bring him down. They soon discover that the killer has blood ties to the infamous now long-dead monster, Ted Bundy. Savich and Sherlock are joined by agents Lucy Carlyle and Cooper McKnight, and the chase is on.

At the same time, Special Agent Lucy Carlyle learns from her dying father that her grandfather hadn't simply walked away from his family twenty-two years earlier: he had, in fact, been murdered by his wife, Lucy's grandmother. Determined to uncover the truth, Lucy moves into her grandmother's Chevy Chase mansion. What she finds, however, is more in the nature of a nightmare. Not only does she discover the truth of what happened all those years ago, but she faces a new mystery, a strange ring that holds powers beyond her ken. She learns about obsession and destruction and ultimate power.

As the hunt for the serial killer escalates, Savich realizes he's become the killer's focus, and the hunted. It's up to Lucy to stop this madness before Savich dies.

Nonfat milk, Fritos, and bananas, Savich repeated to himself as he pulled into the parking lot of Mr. Patil's Shop 'n Go. It was after eight o'clock, and Savich was on his way home from a hard workout at the gym. He felt good, his muscles relaxed and warm, and he looked forward to playing with Sean, maybe with his new video game, Wonky Wizards. He breathed in deeply, enjoying the bite of fall in the air. He looked up at the low-lying clouds that promised to bring showers in the next couple of hours. Nonfat milk and Fritos and--what else?

There was only one car in the parking lot, which wasn't unusual at this time of the evening. A strange play of rapid movement behind the store's large glass window caught his eye. He pulled the Porsche to the far side of the parking lot, out of the line of sight, got out, quietly closed the door, and walked to the edge of the window. he could see a man inside, his face flattened in a leg of pantyhose, standing in front of the counter, pointing a Saturday night special at Mr. Patil's chest. Mr. Patil, who wasn't more than five five with lifts in his shoes and was at least seventy-five years old, looked petrified. He could hear the man yelling at him, but couldn't make out what he was saying. Then he saw a customer. At the end of the counter stood a man about his own age, wearing a bright red Redskins sweatshirt, jeans, and glasses.

Pressed against the man's legs were two small children, a boy and a girl. His hands were wrapped around their shoulders, hugging them tightly against him. Each child held an ice- cream bar, now forgotten.

Keep it together. He couldn't call 911, and take the chance of sirens freaking the guy out, not with kids still in the line of fire. He quickly ran around to the back of the Shop 'n Go and heard the engine running before he saw the Chevy Impala, tucked in the shadows off the parking asphalt. He saw a woman in the driver's seat, leaning in toward the passenger's side to get a partial view inside the store. Since she wasn't wearing panty hose on her head, she obviously wasn't slated to join the actual robbery; she was just there to drive the man in the store out of here. Savich couldn't see the license plate. No matter. She hadn't seen him. Good.

Forget her, let her get away. He crouched down and ran back around to the front of the store. He held his SIG at his side and began whistling. He opened the door and called out, "Good evening, Mr. Patil," and the man in the panty hose whirled around, his gun leading, as the little girl yelled," He'll hurt you!"

The man froze for the longest instant of time in Savich's memory. Savich saw the father grab the children and hurl them to the floor, and then he fell over them while Mr. Patil hefted a six-pack of beer the man had brought to the counter. Then Savich's SIG was up, and he fired. The rule was always to fire only when you intended to kill, but the bullet didn't go into the man's chest, it went into his shoulder. The man screamed, fell hard to his knees, clutching his shoulder, and the .22 went flying.

Savich listened for the Impala's engine to rev, for the car to roar out of there, but he didn't hear anything except a car door slamming shut. He yelled, "Mr. Patil, get down!" Savich dropped to the floor and was rolling when the door burst open and a submachine gun started blasting bullets. He heard Mr. Patil scream from behind the counter, knew he hadn't been fast enough and she'd hit him. He heard the kids screaming, heard the father's deep voice, hazed over with fear, saying, "It's all right, it will be all right." He came up and fired, hit the woman square between the eyes as she swung the gun around toward him. The submachine gun hit the linoleum floor and fetched hard against the counter.

Savich saw Mr. Patil leaning heavily on the counter, a bloom of red on his right arm. He jumped up and quickly checked the gunman, pulled the stocking off his face. He was white, about forty, heavyset, his light brown hair seriously thinning. He moaned, holding his shoulder, the bullet still in him. He was lucky the bullet hadn't hit an artery. He'd survive. Savich picked up the .22 and said, "Keep pressing down on that," and then he went down on his knees beside the woman. Like the man, she was white, fortyish, but she was dead. Her dark eyes were open. A dribble of blood came out of her mouth, and the hole between her eyes was a perfect red dot. Blood haloed out her head.

He quickly pulled off his leather jacket and covered the woman's face. He ran back to Mr. Patil and examined the bullet wound. Through and through, thank God. "You did great, sir. You're going to be okay." Savich grabbed a wad of paper towels from next to the coffee machine and pressed them against Mr. Patils' arm. "Press as hard as you can, sir."

He called 911 and asked for two ambulances and the police. He looked over at the father, still covering his children on the floor. Both children were quiet now, their father murmuring against their heads, "It's okay, kids, everything's okay now--"

Savich looked back at the wounded man, saw he wasn't moving or making a sound. He came down on his haunches, laid his hand lightly on the man's shoulder. He was a big guy, pretty fit, his face less ashen now that he realized they'd all survived. "Don't worry, I'm FBI. You did great; you kept your kids safe. Everything's under control now. The police will be here soon. You're a very brave man; it's a pleasure to meet you," and Savich stuck out his hand. 'I'm Dillon Savich."

The man slowly stood, bringing the children with him, still pressed against his legs. He straightened his glasses and gave Savich a shaky grin. He started to say something, then lost the words, the wild adrenaline rush choking them off. He took Savich's hand, shook it really hard, and at last he managed to say, "I can hear my own heart beating so heavy, it's going to fly out of my chest."

"It's the adrenaline. Believe me, in a couple of minutes you're going to crash."

"No, I can't do that, not with the kids here. Hey, I'm Dave Raditch. Thank you for coming in like that, so sharp and fast. I don't know what the guy was going to do; he might've shot all of us. It sure looked like he was going to kill Mr. Patil. Hush, Michael, everything's okay. Hold Crissy's hand, okay?"

Savich prayed Dave wouldn't bottom out completely after the adrenaline snapped out of him and fall over. He'd seen it before. He looked closely at Dave Raditch, saw he was occupied with stroking those small shuddering bodies, keeping them very close. Savich smiled at him. "You'll do fine," he said, and smiled down at Michael. Then, because it could have been Sean, Savich hugged him. As Savich pressed Michael's face against him, he thought, how would he deal with this violent terror? With the shock of sudden bloody death? As he rubbed his big hands up and down Michaels' back, he said, "Michael, I really need your help. The police will be here soon, and I'll have to speak with them. I want you to hunker down with your dad and sister and talk about what happened, because the police will want to speak with you, too. Do you think you can keep them calm? Can you do that for me?"

Michael hiccupped, wiped the back of his hand over his running nose, and slowly pulled back in Savich's arms. He looked over at the man moaning on the floor, holding his shoulder, his blood everywhere. Then Michael looked at the woman Mr. Savich had covered with his leather jacket. Michael knew she was dead, knew dead meant she wouldn't wake up. And there was Mr. Patil, and he was hurt, too, that woman had shot him, but because he'd heard Mr. Savich tell Mr. Patil he was going to be okay, Michael didn't think he'd have to worry about him. He tried to straighten his shoulders and said, "I can do that, sir," in the most convincing imitation adult voice Savich had ever heard. What was he? Five years old? Sean's age. Thank God Sean hadn't been with him.

"Crissy, it's okay now," Michael said as he patted his sister's back. "Dad, Mr. Savich said the police are coming and we've got to get our stories straight."

Dave Raditch's left eyebrow shot up above his glasses. He didn't know where it came from, but when he met Savich's eyes, he grinned, nodded, but only for an instant, because Crissy face was leached of color and she was shuddering like she had a fever. He cleared his throat. "Okay, Crissy, Michael's right, we've gotta tell the police exactly what happened before Mr. Savich came in. How about the three of us go over there by the potato chips and talk about how this went down, okay?

Crissy Raditch turned to stare at the woman, and then licked her lips. "Did Mr. Savich shoot her dead?"

This is a big one. Savich said, "Yes, I had to, Crissy. I couldn't take the chance she would hurt any of us. Now go with your dad and Michael and work this out."

Savich watched Dave Raditch herd his children behind the chip stand, out of sight of the devastation.

He looked at the dead woman, at the trail of blood seeping from beneath his leather jacket. Had she even considered she might die at 8:27 on a Tuesday night?