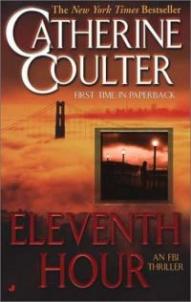 She stood on the bottom step of the ugly Hall of Justice building on Bryant Street.

It was a beautiful Tuesday morning, gloriously sunny, with just a nip in the air, actually a typical winter day in San Francisco, as she'd been told many times. Yes, the air was so clear and sharp you couldn't breathe in deep enough.

She'd only been here about two weeks, and there had been other days like this. But this morning, this incredibly crisp, clear morning, she felt little pleasure. She walked slowly to the top step, people streaming around her, most of them moving fast, focused on where they were hoping. No one paid her any attention.

She was scared, scared. She didn't want to be there, but she didn't have a choice. She'd tried for two solid minutes to convince herself that Father Michael Joseph's death had nothing to do with her, but of course that was not going to work.

It was time to step up.

She went through the metal detector, made her way through the crowded lobby, and took the elevator to the fourth floor.

She'd been to the police station before, when she'd first arrived in San Francisco. She'd had a weak moment, thought she would just waltz in and tell someone what had happened, see if someone would help her. But she realized soon enough that she was dreaming. She'd snuck away. That first time she hadn't noticed the series of black-and-white photos that lined the walls, many of them taken before the earthquake. She walked through the door to Homicide, into the small reception area. There was no one behind the high counter. She paused a moment, then walked through the door. She'd seen a lot of homicide rooms on TV and this one looked much the same except it was smaller, about a dozen big, scarred light oak desks shoved together in pairs, heavy old side chairs beside each one. There was a computer on top of each desk, stacks of loose paper, folders, books, a phone, and what looked like mounds of just plain trash. What struck her was that there wasn't much noise, no cursing, no yelling, no chaos. Just the steady low hum of a dozen simultaneous conversations. On one side of the main room were two small interview rooms, with no windows, that looked like sound-proofed coffins. Finally, from one of these rooms, she heard raised voices.

There were eight or so men in suits standing or seated at their desks, speaking on phones, working on computers. She didn't see any women.

Half a dozen other people stood around the room, some of them thumbing through ratty metal file cabinets that lined every wall, some just studying their fingernails, some looking really worried. She wondered if they were criminals or lawyers, or maybe some of each. One young guy with purple hair and pants so low she could see that his navel was an outie, sauntered out of one of the interview rooms, winked at her, and smacked his lips. He must be really desperate, she thought, ducking her head down, to come on to her.

Other than the kid with the purple hair, no one else paid her a bit of attention. She wondered if anyone would be willing to take the time even to listen to her. Everyone looked harassed, too busy-

It was a uniformed patrol officer. There wasn't a smile on her face. On the other hand, she didn't look like she was ready to chew nails either.

"I need to speak to the detective who's investigating Father Michael Joseph's murder."

The woman lifted a dark brow a good inch. "They're not detectives here in San Francisco. They're inspectors."

"I didn't know that. Thank you. May I please see the inspector? Really, I'm not here to waste anyone's time."

The officer looked her over, and she knew what the officer was seeing. It wasn't good. Finally, the officer said, "All right. I see that Inspector Delion is at his desk. I'll take you to him."

There was a man seated in the chair beside Inspector Delion's desk, his back to her. The set of his shoulders, the color of his hair were somehow familiar to her. A criminal being interviewed?

The officer said, "Hey, Vince, I've got a woman here to see you about Father Michael Joseph's murder."

The man seated in the side chair rose and turned to face her. She stared at him, unable to take it in. She had to be dead, there was no other conclusion. She didn't feel dead, but who knew? Here he was, looking at her, and he was dead, she had seen the bullet hole through his forehead, seen his eyes.

She squeaked, nothing more than that, and folded up on herself, fainting for the first time in her life.

Dane caught her before she cracked her head on the edge of the desk behind her. The inspector sitting there jerked back and said. "Hey!"

"What the hell's wrong with her?" Delion said, shoving back his chair, splaying his hands in his desktop. "Damnation, it's only eight o'clock in the morning. Here, Dane, take her into the lieutenant's office. She and the captain are in a meeting with Chief Kreider, so it's free."

Dane hauled her up in his arms and carried her into a small glass-walled office. Like every other free space ion the area, it was lined with old gray file cabinets that had seen better days a half century before. He laid her on the rattiest, ugliest old green sofa he'd ever seen. No, there was one just as ugly in the rectory at St. Bartholomew's.

"You got some water, Delion?"

Dane went down on his haunches next to her. He gave her a cop's once-over, quickly done, assessment made. She looked homeless-torn jeans, three different sweaters, one on top of the other, all of them on the ratty side, not dirty, just old and tattered. She wore no makeup, no surprise. Her hair was a dirty blond with a bit of curl, longish, tied in the back with a rubber band. Even with all the bulky layers of sweaters, it was easy to tell she was thin, pale, no more than twenty-seven, -eight, max. Not doing well in life, that was for sure. She looked like she'd been in a closet for too long without a glimpse of the sun, or tucked away in a homeless shelter. She also looked like she needed a dozen good meals. She'd been carrying a wool cap. Even unconscious, she still clutched it in her fingers.

They had a homeless woman for a witness?

Of course, that was just the outside. What a person was like on the inside was what was important, what was real. But if her outsides gave any clue at all, it was that something bad had happened to her. Drugs? An abusive husband? Alcohol?

Why did she faint? Hunger?

"Here's some water. She show any signs of life yet?"

A couple of inspectors stuck their heads in. Delion waved them off. "She'll be okay, don't call the paramedics, okay?"

A woman officer said, "She looks really down on her luck. The last person she should want to see is you, Delion."

Her eyelashes fluttered. Slowly, she opened her eyes, blinked a couple of times, and focused on Dane's face above her.

"Oh no," she said, so low he could barely hear her. She tried to get away from him by pressing herself against the back of the sofa. "Oh God, am I dead?"

Dane said, "No, you're not dead. I'm not dead either. You knew my brother, didn't you? Father Michael Joseph?"

"Nope," said Delion. He brought his face down close to hers, which made her shrink back even more. Delion backed off, said, "He's the other end of the scale."

He cupped the back of her head, brought her up a bit, and put the paper cup to her mouth. She sipped at it, then said, "Thank you, no more."

Delion pulled up one of Lieutenant's Purcell's chairs, straddled it, waved Dane to the only other chair in the small room. Dane pulled it up next to the sofa.

Delion said," You here to tell us about Father Michael Joseph? You know something about his murder? You wouldn't be the woman who phoned in the murder about midnight Sunday night, would you?"

"Yes," she said, unable to look away from Father Michael Joseph's brother. She lifted her hand, touched her fingertips to his cheek, the small cleft in his chin. Dane didn't move. She dropped her hand, swallowed tears. Dane saw that her fingernails were as ragged as her sneakers, her hands chapped. "You're so like him," she said. "I only knew him for two weeks, but he was always kind to me, and I know he cared about what happened to me. He was my friend. I'm not Catholic, bit it didn't matter. I was there Sunday might, in the church, when the man shot him."

Delion said, "Why the hell didn't you come forward right away? Good God, woman, it's Tuesday morning. He was murdered midnight Sunday."

"Yes, I know. I'm sorry. I had to call you from a public phone, and I finally found one that worked by a convenience store about two blocks from the church. I called nine-one-one, told the operator what I'd seen. But I couldn't stay, I just couldn't. This morning I knew I had to come and talk to you, that just maybe I could help, but I really don't think so."

"Why couldn't you stay and talk to us on Sunday night?"

"I was just too scared."

She didn't say a word, just shook her head.

"Okay," Delion said, backing off for the moment. "I want you to take a deep breath. Get a hold of yourself. Now then, I want you to tell us everything that happened Sunday night, and don't leave out a single detail. We need everything. Can you do that?"

She nodded, closed her eyes a moment against the fearsome pain, the terror of Father Michael Joseph's violent death.

She stared down at that woolen cap as she said, "All right, I can do this. I was sitting in one of the front pews on the far side of the church, waiting for Father Michael Joseph to finish."

"So you came in after the man had already gone into the confessional?" Delion asked.

"No, I'd been speaking to Father Michael Joseph, and he wanted me to stay, to talk to him when he'd finished hearing this one confession."

Dane said, "Was anyone else in the church?'

"No, it was empty, except for the two of us. It was very dark. Father Michael Joseph left me, walked to the confessional, and went inside."

"You saw the person come into the church?"

"Yes, I saw him. I didn't see him clearly, mind you, but I could see that he was slender, lots of black hair, and he had on a long Burberry coat, dark. I wasn't really paying all that much attention. I saw him go into the confessional."

"Could you hear either Father Michael Joseph or the other person speaking?"

"No, nothing. There was pure, deep silence, like you'd expect in a church at night. A good amount of time passed before I heard a popping sound. I knew instantly that it was a gun firing."

"How'd you know it was a gun?" Delion asked. "Most people wouldn't automatically think gun when they heard a popping sound."

"I went hunting a lot with my father before he died.'

"Just a moment later the man came out of the confessional. I think he was smiling, but I can't be sure. He was holding a big ugly gun in his hand."