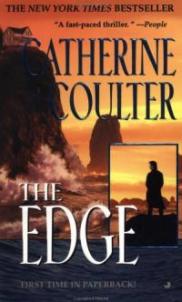 The night was black and calm, silent except for the mellow whine of the newly tuned Porsche engine, yet she heard the soft, sobbing voice pleading with her again, whispering low and deep. It never left her alone now.

No one else was near, it was just Jilly driving alone on the coast highway. The ocean stirred beside her, but with no moon out, it looked like an empty black expanse. The Porsche, sensitive to the slightest touch of her fingers, gently swerved left, toward the cliff, toward the endless expanse of black water beyond. Jilly jerked the car back to the center line.

Laura's voice began sobbing in her brain, then grew louder, filling her, until Jilly wanted to burst.

"Shut up!" Jilly's scream filled the car for a brief moment. Her voice sounded harsh and ugly. It was nothing like Laura's had been, like a small child's sobbing, lost and inconsolable. Only death would bring peace. Jilly felt that voice, Laura's voice, build inside her again. She gripped the steering wheel and stared straight ahead, praying to herself, chanting for it to stop, for Laura to go away.

But Laura didn't stop. She was no longer a child speaking in a sweet, terrified voice. She was herself again, angry now, and this time foul words frothed from her mouth, spewing rage and saliva that Jilly tasted in the back of her throat. She banged her fists on the steering wheel, hard, harder still, rhythmically, to make the malevolent voice go away. She opened the window, pressed it all the way down and leaned out, letting the wind tear her hair back, and her eyes sting and water. She shouted into the night, "Make it stop!"

Jilly drew a deep breath and pulled her head back into the car. The wind whooshed through the car and she sucked in mouthfuls of the cold air. It tasted wonderful. It was over. Thank God, finally it had stopped. She raised her head, looking around, wondering where she was. She'd been driving for hours, it seemed, yet the dashboard clock read only midnight. She'd been gone from home for a half hour.

Her life had become whispers and screams until she couldn't bear it. Now there was silence, deep and complete silence.

Jilly began counting. One, two, three - no curses, no whispers, no small child's pleading, nothing, just her own breathing, the soft hum of her car. She threw her head back and closed her eyes a moment, relishing the silence. She began counting again. Four, five, six - still blessed silence.

Seven, eight - soft, very soft, like a faraway rustling of leaves, coming closer, closer. Not rustling, no, whispering. Laura was whispering again, begging not to die, begging and pleading and swearing she'd never meant to sleep with him, but it had happened, he'd made it happen. But Jilly hadn't believed her.

"Please, stop, stop, stop," Jilly chanted over that feathery voice. Laura began screaming that Jilly was a pathetic bitch, a fool who couldn't see what she was. Jilly stomped down on the gas pedal. The Porsche lurched forward, hitting seventy, eighty, eighty-five. The coast road swerved. She kept the car directly in the center of the road. She began singing. Laura screamed louder, and Jilly sang louder. Ninety. Ninety-five.

"Go away. Damn you , go away!" Jilly' knuckles were white on the steering wheel, her head low, her forehead nearly touching the rim. The engine's vibrations made Laura's screaming voice convulse with power.

Jilly saw the sharp turn, but Laura yelled that they would be together soon now, very soon. She couldn't wait to get Jilly, and then they'd see who would win.

Jilly screamed, whether at Laura or at the sight of the cliff dropping some forty feet to the heaped and tumbled black rocks below. The Porsche plunged through the railing, thick wood and steel, picking up speed, and shot out to the vast empty blackness beyond.

One more scream rent the silence before the Porsche sliced nose first through the still, black water. There was scarcely a sound, just the fast downward slicing through the water at the sharp, clean impact, then the quick shifting and closing over, the calm water returning to what it had been just a second before.

Then there was only the black night. And calm and silence.