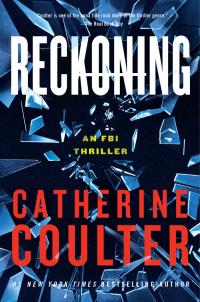 The 26th FBI suspense thriller with Savich and Sherlock, out Aug. 2nd

When she was twelve years old, Kirra Mandarian’s parents were murdered and she barely escaped with her life. Fourteen years later Kirra is a commonwealth attorney back home in Porte Franklin, Virginia, and her goal is to find out who killed her parents and why. She assumes the identity of E.N.—Eliot Ness—and gathers proof to bring down the man she believes was behind her parents’ deaths. She quickly learns that big-time criminals are very dangerous indeed and realizes she needs Dillon Savich’s help. Savich brings in Special Agent Griffin Hammersmith to work with Lieutenant Jeter Thorpe, the young detective who’d saved Kirra years before.

Emma Hunt, a piano prodigy and the granddaughter of powerful crime boss Mason Lord, was only six years old when she was abducted. Then, she was saved by her adoptive father, San Francisco federal judge Ramsey Hunt. Now a 12-year-old with a black belt in Tae Kwon Do, she narrowly saves herself from a would-be kidnapper at Davies Hall in San Francisco. Worried for her safety, Emma’s entire family joins her for her next performance, at the Kennedy Center in Washington, D.C.. Sherlock and officers from METRO are assigned to protect her, but things don’t turn out as planned…

"It's all right, sweetheart, you're all right. You're safe. Come on, wake up, you had a nightmare. You're okay. I've got you."

She heard his voice, a man's voice, and he was close, too close. Terror squeezed her throat, made her heart kettledrum. The men were near, coming to kill her like they'd killed her parents. She fought like a wild thing, hitting at his arms holding her.

He held her tightly against him and continued to whisper against her cheek, his voice low and calm. Slowly she came awake, hiccupping at the knot of fear in her throat. She saw a dim face above her, a face she knew, a face she trusted. He was holding her, stroking her back as he continued to speak in his low easy voice, saying nonsense, really, reassuring her. Finally, she knew who it was.

Leo continued to hold her, lightly rubbed his hands up and down her back, slow and easy, like a wounded and terrified kangaroo joey tangled in a barbed wire fence. "Don't be daft. I'd have bloody nightmares too if I'd been through what you have. That's right, breathe deep, that's my girl." He kissed her forehead. Slowly, the images from her dream blurred and faded. It was odd but sometimes in her dreams she felt the pain from her bullet wound on the side of her head, and the gash in her arm from the wood shard. She sucked in another deep breath, locked her arms around his back, and pressed her face against his chest.

The paralyzing fear wasn't as hard to shake off this time. Even though it was pleasantly warm in the tent, she shivered. She burrowed closer, felt Uncle Leo's steady strong heartbeat against her cheek, the warmth of his large hands stroking up and down her back. The world, her new world, wove itself together again.

The nightmares came less often now, but still, when they were on walkabout with one of their small tour groups, Uncle Leo slept in her tent, his sleeping bag close. "Do you think any of the jocks heard me scream?"

She always asked. His voice was low and gentle, his warm breath feathering the cool night air against her cheek. "No, you didn't scream this time. Do you realize this is the first nightmare you've had in a week? That's very good."

"Then how did you know?"

He didn't tell her whenever she tossed even once, he was wide awake. "You were moaning and thrashing around in your sleeping bag. Take some more deep breaths now, sweetheart. Here, drink some water."

He handed her bottled water, watched her chug, water dripping off her chin. He remembered the first night he'd been with her, sleeping on a cot in her hospital room. He'd jerked awake when she'd screamed, grabbed for his gun that wasn't, of course, anywhere near. He remembered how helpless he'd felt, but he'd pulled her against him then, too, hugged her and spoke nonsense until she quieted, nodding to the nurse who came silently to the doorway. Even after four months, it still ripped his heart out when she had that nightmare.

He rocked her now, feeling her finally ease. He remembered the phone call he'd gotten from the police in Porte Franklyn, Virginia, informing him his sister and her husband had been murdered, and his niece was in the hospital with a head wound. It had taken him a full day in a single-engine prop plane and a series of flights across the Pacific to reach her. He was grief-stricken, furious, demanded to know who had done such a thing, but the police had no answers. Maybe a home invasion, a robbery gone wrong, they'd said. He'd called Detective Jeter Thorpe every week at first, but after every phone call, he'd had to tell Allison there was nothing new. At least she was safe with him now, her only living family, in her new home in Australia. At first he'd been terrified he had sole responsibility for a twelve-year-old girl, but that hadn't lasted. Now she was his.

Leo was single, loved what he called "safe" danger. He was thirty-one years old, viewed by many as a throwback to swashbuckler days. He'd become a celebrity, something that always amused and amazed him. Because he wrestled crocs? He didn't. Because he knew how to survive in the outback? He did.

This weekend, he and Allison were leading a group of four jocks from Alabama on a challenging trek in the Northern Territory, along with his good friend Jawli, an Aborigine. He'd established his company with Jawli six years before -- Extreme Australian Adventures. They'd both survived just about everything the outback could throw at them, and he loved the life, loved owing nothing to anyone except his partner. But now there was his sister's twelve-year-old daughter, who'd survived her parents' murder, survived being shot herself. Just before he'd arrived in Porte Franklyn there'd been a second attempt on her life in the hospital, thwarted by a nurse who'd screamed until the man had raced away down the stairs. He hadn't been found, either. It curdled Leo's blood to think she might have killed in her hospital bed. The police had welcomed him as a savior when he arrived. Not only was he Allison Rendahl's uncle, he'd take her to Australia, on the other side of the planet.

He said quietly now, "We need to get some sleep or those college jocks might even show us up tomorrow."

Leo kissed her forehead again, rubbed her back. He'd learned that soothed her like nothing else. She whispered against his shoulder, "I won't let you down, Uncle Leo. I've looked them over, sooks the lot of them." She'd learned quickly that Aussies said sook, not wimp. He felt her mouth curve into a grin. "We'll leave them moaning in the dust. Did you see those dark sunnies they were wearing even after the sun went down? They look like wankers."

She settled against his side, breathed in his familiar scent. She trusted this man she'd met only three times in her life before he'd come to her at the hospital. Her mother had chuckled about him, called the family "wild hair". Her father had rolled his eyes when he showed her a postcard he'd sent of the Blue Mountains near Sydney that called that place a bushwalker's spiritual pilgrimage. She'd loved that word bushwalker, it called up visions of adventure. And now she'd actually hiked there, on a four-hour trail with two intrepid older couples from Maine. The first time out, she'd been exhausted, but now, after four months, that Blue Mountains hike was easy for her -- a piece of piss in Aussie talk. She loved the smell of the eucalyptus trees that stretched as far as she could see, the cockatoos screeching across the valley. She couldn't wait for another group to book a tour to the Blue Mountains.

She'd eased herself back down to sleep, but Leo knew she was still awake. It was a good time as any, he thought, and he said, his voice matter of fact, "Jawli agrees with me it's time to give you a new name. Tell me what you think -– Kirra. It's an Aborigine name Jawli picked for you. It means ‘to live' in the Murri dialect of southern Queensland. In part it's for your protection, sure, but I think it suits you."

She focused on the name –- Kirra. Yes, she liked that, it was fitting. After all, that's what she'd done, she'd lived, and now she had a new life, so why not a new name? "Kirra –- I like it, Uncle Leo. But Rendahl -– that's still from my other life." My other world, she thought, my other planet.

"I'm pleased you like it." Now for the tough part. He said slowly, feeling his way, "If you agree, I'd like to adopt you. You'd be Kirra Mandarian." It was yet another way to keep her safe if the men who'd killed her parents decided to come after her. He didn't think there was any more danger, but he didn't want to take any chances. He didn't mention that to her or that it was to for his peace of mind. She'd know that too.

Kirra Mandarian. She leaned against his well-worn t-shirt and breathed in his familiar scent, man and sweat, not at all unpleasant. She felt his strong heartbeat against her cheek and knew she was safe. She whispered. "Does that mean I'll never have to leave you?"

On her eighteenth birthday, Kirra Mandarian opened her acceptance letter from ANU, Australian National University in Canberra, Australia's capital. Leaving Uncle Leo and the EAA team was difficult for Kirra. She knew she wouldn't be like any of the other students an ANU – an American with an accent who spoke fluent Australian that was even on the edgy side, like most of the other members of the EAA, except for Jawlie's wife Mala, an Aborigine guide and chef, who'd taught her how to cook, use a bull whip and fly a drone. In her martial arts classes at ANU, the instructors weren't surprised at her skill and toughness; after all, she'd been raised by Leo Mandarin with the outback her backyard. Kirra was as fit as any of the major athletes. No one crossed her. She briefly fell in love with an Aussie whose dream was to race at Daytona Beach and Le Mans. He taught her how to drive, really drive. It was unfortunate he was doing drugs. She dumped him.

Kirra imagined if she was popular at all, it was because she was Leo Mandarian's adopted daughter. Even though she'd known for many years that she'd attend university, study law, then move back to her childhood home in Porte Franklyn, Virginia, larger now than when she'd left, not quite the size of Richmond, but close. Her goal to be a prosecutor in the Porte Franklyn Commonwealth Attorney's Office. It still hurt to leave Australia and Uncle Leo, but she knew she had to find out who killed her parents and tried to kill a twelve-year-old girl. It was her most important goal. Uncle Leo understood even though he didn't want her to do it. "You know how to escape a pissed-off crocodile, but a cold-blooded murderer? Different animal and more dangerous.'

Even now she had the occasional nightmare about the night the men who broke into her home and murdered her family. They were still in Virginia, and still free.