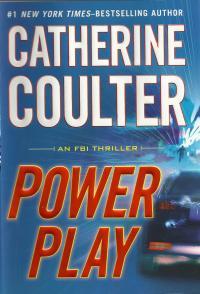 Natalie Black, the U.S. ambassador to the Court of St. James, has returned to Washington, her job in jeopardy. Her fiancé, George McCallum, Viscount Lockenby, has died in a car accident, and mysterious rumors begin that she’s responsible begin to surface: she broke off the engagement and, heartbroken, he killed himself. Then someone tries to force her off the M-2 outside London. Again, rumors claim it was a sympathy ploy. When she returns to the United States, she’s nearly killed when a car tries to mow her down while she’s out for a run. No one believes her except FBI Special Agent Davis Sullivan.

Meanwhile someone is following Sherlock. A stalker? Then someone tries to shoot her from the back of a motorcycle, but the assailant gets away. Sherlock next gets a call from an Atlanta mental hospital warning her that Blessed Backman has escaped. This is not good news. Blessed is a talented psychopath out for revenge against the agents, primarily Sherlock, whom his dying mother begged him to kill since she and Savich brought down her cult.

How to find out who’s trying to kill the ambassador to the U.K.? How can they get their hands on Blessed Backman before he succeeds and kills Sherlock? The clock is ticking and the danger intensifies . . .

He turned stone cold and his focus narrowed laser-thin on the man who held the woman in a choke hold. A carjacking in the parking lot of a strip mall not a half-mile from his town house on Euclid—the first one he’d ever seen, and here he was in the middle of it. He’d been walking to his Jeep, a large Starbucks coffee in his left hand, when he saw this man grab the woman and jerk her out of the driver’s side of a shiny black Beemer. She screamed once. Davis yelled at the man to let her go and back away, but the man dragged the woman in front of him, whirled around to face him, and pointed a .22 at her temple. A crap gun, but it could do the job.

The guy was maybe thirty, and higher than Carly from Homeland Security when she’d nabbed a terrorist in Pittsburgh. He was probably on ice, given the way he was jonesing around, his body jerking on puppet strings. Even from fifteen feet away, Davis could see his eyes were jitterbugging, the hand that held the .22 to the woman’s head shaking. Not good.

New tactics. Davis called out, “Dude, I get it. Look, I love my Starbucks fix, too”—he waved his cup—“but you’ve got to let her go.”

“Go away, ass-wipe, or it’s brains-down-the-drain time!” Jitterbug tightened his hold around her neck, pressing the .22 hard against her cheek. The woman’s hands clutched at his forearm, trying to pull it away from her neck to catch a breath. Even from this distance, it looked to Davis like she was more pissed off than afraid.

“Seriously, dude,” Davis called out. “It’s really not a good idea to mess with me. I’m FBI, a walking, talking death machine. You can’t hit me from fifteen feet with that popgun, but I can shoot the gold hoop out of your ear and call my mother at the same time while singing ‘Happy Birthday.’” He pulled his Glock from his holster for Jitterbug to see, then held it down at his side. “You hurt this very nice lady and I’ll personally stuff you in a meat grinder and make a cheap burger out of you. You got me? You need rehab, not this Beemer you’d just wreck, which really would be a shame, about the car, I mean. So put the peashooter down and let the lady go.”

Jitterbug stared at him, as if trying to make sense out of his words. He was shaking his head back and forth, maybe listening to other voices, who knew? His eyes whirled, his mouth worked, his hand shook, and through all his gyrations the woman looked straight at Davis, calm as could be, and gave him a slight nod. Without a pause, she bent her head and took a deep bite out of Jitterbug’s forearm, right through the tatty sweatshirt he was wearing. He yelled, loosened his grip. She pulled back inside the open car door to give herself leverage and sent her fist into his nose, then her elbow into his gut. He jerked up his .22 and fired wildly, not at the woman but at Davis, once, twice, three times. Nowhere close. Davis leaned down, carefully put his coffee cup on the ground and raised his Glock. The woman was pinned between Jitterbug and the car door, and he made another grab for her, jerking the gun up again toward her head.

“I wish you hadn’t done that,” Davis said, and very calmly shot the man in the shoulder. One bullet did the trick. The man lurched back and fell away from the open car door and onto his knees, howling, holding his shoulder, rocking back and forth, the gun skittering away from him. The woman shouted to Davis, “Good shot!” And she gave the guy a kick in the ribs, sending him screaming onto his side. Then she knelt down, agile as a teenager, and picked up the .22.

A good half-dozen shoppers dribbled out of the shops toward the parking lot now that it looked safe and they wouldn’t get caught in anyone’s crosshairs. They were brimming with excitement, chattering nervously. A woman screamed, as if for effect. Davis opened his mouth at the same moment the woman held up her hand, cleared her throat, and said in a booming voice that carried all the way to LaFleur’s Dry Cleaners across the road, “Everything’s okay now, people! You, sir, call nine-one-one. The rest of you, you’ll want to stay and talk to the police when they get here. I mean it, this is important. I’d do it for any one of you, so do it for me, okay?” She gave them all the big stink eye, a nod, and an approving smile.

To his surprise, only two of the bystanders melted away. The others grouped together, comparing notes, still flying high on adrenaline.
Davis holstered his Glock and picked up his Starbucks coffee. He sipped it. Still hot. Good.

The woman started toward him. She was tall, fit, and strong, by the look of the blows she’d dealt Jitterbug. Not a coward, this woman, more a force. In that instant, he realized she reminded him of Sherlock, or Sherlock’s mom, all the way to the red hair bouncing around on her head. It was kind of scary. She was smiling big, showing lovely white teeth, and her red hair seemed to turn redder as the sun suddenly broke through the clouds overhead. She handed him Jitterbug’s .22, butt first, barrel to the ground, smooth and easy. She knew gun safety. Even more scary.

“A meat grinder? Really?” She quirked a dark red eyebrow at him, leaned forward, and kissed him soundly on the cheek.

She smelled like honey. “Well,” he said, “the thing is, my granny always used a meat grinder when I visited her as a kid. I remember she threatened my granddad with it when he smoked his cigar in the kitchen. Why weren’t you scared?”

“Believe me, I was scared to my toes, until I realized he was only a pathetic guy high on drugs,” and she looked back at Jitterbug, lying there holding his shoulder, moaning.

An hour later in the CAU, Davis said to the gathered agents, “Metro showed up two minutes later, along with an ambulance that hauled Jitterbug to the hospital. Some of the cops questioned the bystanders, others questioned the woman, and another two questioned me until I wanted to hurl. I even mentioned Savich a couple of times, but all I got for dropping the Big Dog’s name was one guy who rolled his eyes and one big-deal grunt. They kept asking me the same questions over and over as they usually do. The woman finally broke in and said enough was enough and we were in need of a nice strong morning shot of bourbon and I was to follow her back home in case she fainted—not likely—where we’d toast our mutual good luck and competence. She shoved her card into one of their hands and smiled at him. The two cops were so taken aback, they let us both leave, and I followed her home.”

Davis grinned around the room. “So that’s the story of why I’m late, and I’m sticking to it.”

Savich said, “Really? Nah, that can’t be true. You’re actually saying one of the cops rolled his eyes and the other one only grunted when you said my name?”

“Yeah, couldn’t believe it myself. You’d think maybe they’d have some respect.”

Savich grinned, shook his head. “I can confirm that Jitterbug—name’s Paul Jones—is in surgery at Washington Memorial to remove the bullet from his shoulder. Metro’s in charge.”

Special Agent Lucy Carlyle, soon to be Lucy McKnight, was shaking her head. “Davis, listen to me. You could be in the bed next to Mr. Bug at Washington Memorial instead of sitting here trying to make us laugh. I can see it all: you’re moseying to your Jeep, sipping your latte, thinking about who you’ve got a date with tonight, when that idiot grabs the lady.”

“Yeah, yeah, macho black. One part of your brain is trying out jokes to tell your girlfriend tonight and all of a sudden, your manic brain snaps to figuring out angles and distances, the drugged psychology of Mr. Bug, and calculating probabilities for survival, right?”

Davis said, “Hey, I already know what jokes work.” He paused for a moment. “And my brain isn’t manic. It’s a finely tuned instrument. Do you know, though, I think she’d have taken Jitterbug down herself once she got over her surprise at his popping out of the box like that. I gotta say it’s possible she really didn’t need me. Tough, that one. Lots of red hair, like yours, Sherlock. I bet she’d impress you.

“I did follow her home to this swank gated mansion on a huge lot in Chevy Chase, halfway down Ridgewood Road, through this big secure gate with a guardhouse, cameras, and an intercom. It’s all woods out there, with very few houses. The ones that are there are big and set back and very private. The guardhouse was empty, but she didn’t have to speak to anyone on the intercom. Nope, the gate opened up fast, which means there were cameras inside monitoring. I was right behind her in my plebian Jeep on her big circular driveway. Before we’d even stopped, this big guy comes running out of the house, makes a beeline right at me like he’s going to rip my tonsils out. She climbs out of her BMW and calls out something like ‘Hooley, it’s okay.’

“Since I had to come to work and couldn’t toast her with the bourbon, she patted my face and gave me another kiss. Hooley’s standing only six feet away, his arms crossed over his chest, measuring me for a coffin. He was a bodyguard, I’m sure of it. I’m thinking maybe she’s someone important.”

“Does anyone recognize the name Natalie Black?”

Sherlock stared at him. “You’ve got to be kidding me.”