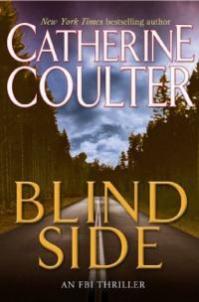 It was pitch black.

There was no moon, no stars, just low lying rain-bloated clouds, as black as the sky. Savich was sweating in his Kevlar vest even though it was fifty degrees.

He dropped to his knees, raised his hand to stop the agents behind him, and carefully slid into position so he could see into the room.

The window was dirty, the tattered draperies a vomit-brown, only one lamp in the corner throwing off 60 watts. The rest of the living room was in gloom, but he could clearly see the teacher, James Marple, tied to a chair, gagged, his head fallen forward. Was he asleep or unconscious? Or dead?

He didn’t see Wade Phelps, the sixty-seven year old man who owned this run-down little 1950’s tract house on the outskirts of the tiny town of Mount Pleasant, Virginia. From what they’d found out in the hour before they’d converged on this small house, the man was himself a retired math teacher and owned the old Buick sitting in the patched-up drive. Savich knew from his Driver’s License that Phelps was tall, skinny, and had a head high with thick white hair. And for some reason, he was evidently killing other math teachers. Two, to date. No one knew why yet. There was no connection that anyone could find between the first two murdered teachers.

Savich wanted the man alive. He wanted the man to tell him why he’d caused all this misery, destroyed two families. For what? He needed to know, for the future. The behavioral science folk hadn’t ever suggested that the killer could possibly be a math teacher himself.

Savich saw James Marple’s head jerk. At least he was alive. There was a zigzagging line of blood coming over the top of Mr. Marple’s bald head from a blow Phelps must have dealt him. The blood had dried just short of his mouth.

Where was Wade Phelps?

They were here only because one of Agent Ruth Warnecki’s snitches had come through. Ruth, in the CAU for only a year now, had spent eight years on the Washington D.C. police department. She had not only brought her great street skills to the unit, she’d also brought her snitches with her. “A woman can never be too rich, too thin, or have too many snitches,” was her motto.

The snitch had seen Wade Phelps pull a gun on a guy in the parking lot of a small strip mall, pull him out of his Volvo station wagon and shove him into an old Buick. The snitch had called Ruth as he was tailing them to this house, and told her he’d give her the whole enchilada for five hundred bucks, including the license plate number of the man taken. Savich didn’t want to think about what would have happened to Mr. Marple if the snitch hadn’t come through.

But Savich shook his head as he looked at the scene through the window. It didn’t fit. The other two math teachers had been shot in the forehead from close range, dead instantly. There’d been no kidnapping, no overnight stays tied to a chair with a 60-watt bulb lighting the shadows. Why change the way he did things now? Why take such a risk by bringing the victim to his own home? No, something wasn’t right.

Savich suddenly saw a movement, a shadow that rippled over the far wall in the living room. He raised his hand and made a fist, signaling Dane Carver, Ruth Warnecki, and Sherlock that he wanted everyone to stay put and keep silent. They would hold the local Virginia law enforcement folk in check, at least for a while. Everyone was in place, including five guys from the Washington Field Office SWAT team who were ready to take this place apart at the seams if given the word. Every corner of the property was covered. Cooper was the one sniper and he was in his place, some twenty feet behind Savich, with a clear view into that shadowy living room.

Savich saw another ripple in the dim light. A shadow rose up from behind a ratty sofa. It was Wade Phelps, the man whose photo he’d first seen just an hour ago. He was walking toward James Marple, no, swaggering was more like it. What had he been doing behind the sofa?

When Phelps wasn’t more than a foot from Marple, he said, his voice quite deep and pleasant, “Are you awake, Jimbo? Come on, I didn’t hit you that hard, you pathetic wuss.”

Jimbo? Savich turned the volume up a bit on his directional receiver.

“Do you know it will be dawn in another thirty-seven minutes? I’ve decided to kill you at dawn.”

Mr. Marple slowly raised his head. His glasses had slipped down his nose and since his hands were tied behind him, he couldn’t do anything about it. He licked at the dried blood beside his mouth.

“Yes, I’m awake. What do you want, Philly? What the hell is going on here? Why are you doing this?”

Philly? The two men knew each other well enough for nicknames.

Phelps laughed, and Savich felt his skin crawl. It was a mad old laugh, scratchy and black, not at all pleasant and deep like his voice. Phelps pulled a knife that gleamed even in the dull light.

Savich had expected a gun, not a knife. It wasn’t supposed to go down like this. Two dead high school math teachers, and now this. Not in pattern. What was going on here?

“You ready to die, Jimbo, you little prick?”

“I’m not a prick. What the hell are you doing? Are you insane? Jesus, Philly, it’s been over five years! Put down that knife!”

But Mr. Phelps tossed the knife from one hand to the other with easy movements that bespoke great familiarity.

“Why should I, Jimbo? I think I’m going to cut out your brain. I’ve always hated your brain, do you know that? I’ve always despised you for the way you wanted everyone to see how smart you were, how fast you could jigger out magic solutions, you little bastard--” He was laughing as he slowly raised the knife.

“Yeah, but I’m old, and who knows? By dawn I might be dropped over with a heart attack. I really do want you dead before me, Jimbo.”

Savich had already aimed his SIG Sauer, his mouth open to yell, when Jimbo screamed, kicked out wildly, and flung the chair over backwards. Phelps dove forward after him, cursing, stabbing the knife through the air.

Savich fired right at that long silver blade. At nearly the same moment, there was another shot – the loud, sharp sound of a rifle, fired from a distance.

The long knife exploded, shattering Phelp’s hand; the next thing to go flying was Phelp’s brain as his head exploded. Savich saw his bloody fingers spiraling upward, spewing blood, and shards of silver raining down, but Phelps wouldn’t miss his hand or his fingers. Savich whipped around, not wanting to believe what had just happened.

The sniper, Kurt Cooper, had fired.

Savich yelled, “No,” but of course it was way too late. Savich ran to the front door and slammed through, agents and local cops behind him.

Jimbo was lying on his back, white-faced, whimpering. By going over backwards, he’d saved himself from being splattered by Mr. Phelp’s brains.

Mr. Phelp’s body lay on its side, his head nearly severed from his neck, sharp points of the silver knife blade embedded in his face and chest, his right wrist a bloody stump.

“Not any longer. He’s dead. You’re all right.” Savich got him free and helped him to his feet, keeping himself between Jimbo Marple and the corpse.

Jimbo looked up, his eyes glassy, spit dribbling from his mouth. “I never liked the cops before, always thought you were a bunch of fascists, but you saved me. You actually saved my life.”

“Yeah, well, we do try to do that occasionally. Now, let’s just get you out of here. Here’s Agent Sherlock and Agent Warnecki. They’re going to take you to the medics for a once-over. You’re okay, Mr. Marple. Everything is okay.”

Savich stood there a moment, listening to Sherlock talk to Jimbo Marple in that wonderful soothing voice of hers that she had used at Sean’s first birthday party. One terrified math teacher wouldn’t be a problem compared to a roomful of one-year-olds.

Agent Dane Carver helped support Jimbo Marple, a slight smile on his face until Sherlock steeped back, and then he and Agent Warnecki escorted Jimbo Marple to the waiting paramedics.

Savich turned back to the body of Wade Phelps. Cooper had nearly blown the guy’s head off. A great shot, very precise, no chance of his killing Marple in a reactive move, no chance for him to even know what was happening before he died.

It wasn’t supposed to have happened that way, but Cooper had standing orders to fire if there was imminent danger.

He saw Police Chief Able trotting toward him, followed by a half-dozen excited local cops, all of them hyped, all of them smiling. That would change when they saw Phelp’s body.

But it wasn’t the killer they were after, Savich was sure of that. To date, he’d killed two women, both high school math teachers. And in a sense, that maniac was responsible for this mess as well. He was probably why Cooper had jumped the gun and taken Phelps out. He saw himself saving Jimbo Marple’s life and taking out the math teacher killer at the same time. In all fairness, Coop was only twenty-four, loaded with testosterone, and still out to save the world. Not good enough. Savich would see to it he had his butt drop-kicked and then sentenced to scrubbing out the SWAT team’s bathroom, the cruelest penalty anyone could devise.

The media initially ignored the fact that this killing had nothing to do with the two math teacher killings. The early evening headlines read: SERIAL KILLER DEAD? And underneath, in much smaller letters, because math teachers weren’t very sexy: Math Teachers Targeted. The first two murders were detailed yet again. Only way down the page was it mentioned that the kidnapping and attempted murder of James Marple by Wade Phelps of Mount Pleasant, Virginia, had nothing to do with the two other math teacher killings.

Par for the course