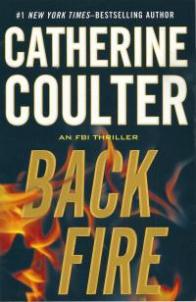 Excerpt for BACKFIRE by Catherine Coulter

Judge Ramsey Hunt listened to the lapping water break against the rocks below, a sound that always brought him back to himself, and centered him. He stood at this exact spot every night and listened to the waves, as unending and as infinite as he knew he wasn't. Only the sound of the waves, he thought. Otherwise, it was dead silent, not even a distant fog horn blasting from the huge cargo ship that was nearing the Golden Gate through a veil of low lying fog.

There was a light breeze ruffling the tree leaves and putting a light chop on the ocean below. It was chilly tonight. He was glad Molly had tossed him his leather jacket on his way out. A week before Thanksgiving, he thought, a week before he presided over the turkey carving and felt so blessed he'd feel like singing, which, thankfully, he wouldn't.

Ramsey looked up at the low-hanging half moon that seemed cold and alien tonight. His ever-curious son Cal had asked him if he could sink his fingers into the pitted surface. Would it be hard, like his wooden Ford truck, he wondered, or soft like ice cream?

At least his day had ended well. In the late afternoon, he'd met Molly and the twins at Davies Hall to hear Emma rehearse Gershwin's Rhapsody in Blue with the San Francisco Symphony smiling and nodding as they listened. Ramsey had long thought of her as his own daughter since he adopted her five years ago, and here she was, a prodigy, of all things. He nearly burst with pride, Molly always said. Remarkably, Cal and Gage hadn't raised too much of a fuss at having to sit still during the rehearsal. Well, Cal did yell out once, "Emmy, I want you to play Twinkle Twinkle Little Star!" which had brought warm laughter from the violin section.

They'd enjoyed enchiladas and tacos an hour later at La Barca, the family's favorite Mexican restaurant on Lombard, always an adventure when the three-year-old twins were anywhere near chips and guacamole.

Ramsey rested his elbows on the solid stone fence built when his boys had reached the age of exploration a year and a half ago. Better than nightmares about them tumbling off the sixty foot cliff into the mess of rocks and water below.

He looked out across the entrance to the bay at the Marin Headlands, as stark and barren as the half moon above them. Soon the winter rains would begin to green things up, as green as Ireland in some years, his second favorite place on earth after San Francisco. It was a blessing that this incredible stretch was all a national recreational area so he would never have to look at some guy sipping a nice fruity Chardonnay across from him on a condo balcony. He noticed a lone boat, a Zodiac, sitting anchored below him, nearly as still as a small island in the ocean. There were no other boats around it that he could see. Who would be out so late, anchored in the open water? He saw no one aboard and for a moment he felt alarmed. Had someone fallen overboard? No, whoever motored over in the Zodiac could easily have swum or waded to the narrow beach. But why? Not to get a suntan, that's for sure. He wondered if he should call 911 when he heard Molly open the family room door behind him. "Goodness, it's cold out here. I'm glad you're wearing your jacket. Is your favorite sea lion talking to you again?"

Ramsey smiled. Old Carl, that was the name he'd given this giant of a sea lion that liked to laze about in the water below. He hadn't seen Old Carl in several days now. He called back, "He's probably at Pier 39 stretched out on the barges with his cousins. What's up?"

"Gage had a nightmare. Can you come and tell him the green bean monster isn't lurking in his closet? He doesn't believe me."

He turned to her, grinning. "Be right there --"

Molly heard a shot, cold and sharp as the moon, and saw her husband slammed violently forward by a bullet. Molly's scream pierced the night.