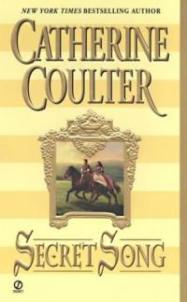 Secret Song first came out in 1991. It's the final novel in the Medieval Song Quartet. Like its first three cousins, I didn't do any rewriting, just say with joy at the gorgeous new cover.

In Secret Song, we get down and dirty. You met Roland de Tournay in Earth Song - a handsome man with a subtle wit and quick tongue who was variously an actor, an adventurer, a master of disguise. Now in Secret Song he meets his destiny when he must rescue Daria of Fortesque from a Welsh stronghold. He's as daring, as clever, as talented as he is. What's a man to do?

The link between them is as unbreakable as the fine forged steel of Roland's sword, but being obstinate, mule-headed - in other words, a man - he resists with all his might. You'll see characters from Earth Song and Fire Song stick their oars in to assist this beset pair, with varying degrees of success.

Do write me and tell me which of the Medieval Song Quartet you like the best. Actually, I'm hoping you have a really hard time selecting just one of them.