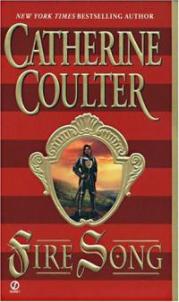 Fire Song first came out in 1985. It's now the second novel in the Medieval Song Quartet. I haven't done any rewriting, just hummed with pleasure at the beautiful new cover.

Lord Graelam de Moreton first appeared in Warrior's Song. (originally titled Chandra) He was a warrior, a man both hard and ruthless, a man who took what he wanted and never looked back. He was, and still is, a very bad boy. But things change and Graelam finds himself in a situation he never anticipated: he has gotten himself a wife through no fault of his own.

Kassia de Lorris of Brittany is gentle and yielding, untested in the ways of men. She cheats death only to find herself wedded to a stranger.

When the two meet as husband and wife at Graelam's castle of Wolffeton in Cornwall, Kassia is prepared to give obeisance to this man he father chose for her. Graelam is willing to accept her as she appears - a lady as innocent and guileless as rainwater flowing through his fingers.

But things change again. Graelam comes to believe she has betrayed him. It's time for Kassia to prove her mettle.
You'll be seeing Graelam and Kassia again in Earth Song and Secret Song. Do enjoy -