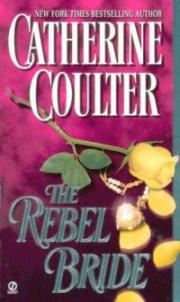 The Rebel Bride was my second novel. Although it was originally published as a Regency, I always felt that it was a historical romance at heart. So, I've rewritten this story of two stubborn, strong-willed people, and Topaz is bringing it out again for you - this time as the historical it could have been.

The rebel bride is Katharine Brandon, a hoyden with hair as red as a stormy sunset whose fierce independence masks her loneliness. When Julien St. Clair, Earl of March, sees her for the first time, she is dressed like a boy while engaged in a rather mock duel with her brother. And since it's her turn to be fatally wounded, she dies dramatically at Julien's feet. A powerful, sophisticated nobleman who is bored and restless with a life that holds little more interest for him, the earl finds himself suddenly and thoroughly bewitched by this unusual young lady. But when he decides he wants her, he discovers that all is not what it seems. From the glittering Regency ballrooms of 1814 London, to Paris, and finally to Switzerland, the earl and his unwilling bride play a dangerous game of passion, until everything changes irrevocably between them...and Julien discovers Katharine's terrifying secret.

If you read the original The Rebel Bride, do read it again. I would be interested to know what you think of my changes.

Please enjoy-Julien and Katharine are two of my all-time personal favorite characters.