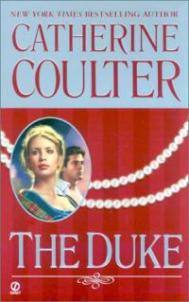 The Duke is the new title for one of my first novels, originally titled The Generous Earl. I changed the title to fit what the book has become since I've rewritten it-a long, lavish historical, a love story to make your heart sing, and as an extra bonus, a mystery that will keep you guessing until the last page.

So come back to the beginning of the nineteenth century to Scotland, to Penderleigh Castle, home of the Robertsons, who have just been dealt a terrible blow. Their new master, already an English duke, has just been named the Scottish earl of Penderleigh.

Ian Carmichael, Duke of Portmaine, is proud, aristocratic, handsome as the devil's right hand, and kinder than any grousing Robertson has a right to expect. Brandy Robertson - the old earl's granddaughter - takes one look at the duke and her heart goes ballistic.

The problem is, the duke is already engaged, and if that isn't bad enough, someone wants to kill him.One of the embittered Robertsons? There are lots of juicy suspects to choose from.

Do read The Duke and see how everything turns out. Let me know what you think.