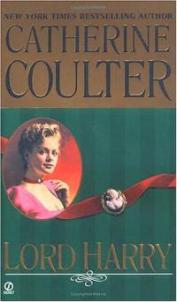 Lord Harry, one of my first novels, was originally titled Lord Harry's Folly. I've rewritten the story extensively, adding to and changing dialogue, actions and descriptions, yet the original plot is still here. I am convinced-and I'm sure you'll be too - that the characters are much happier now since they have lived with me for fifteen years and taught me more about themselves.

Henrietta Rolland reigns as queen of the London Season, winning men's hearts and women's envy with her beauty, charm, and wit - until she discovers that a notorious rake, Jason Cavander, the Marquess of Oberlon, is responsible for the death of her brother Damien at Waterloo. Determined to avenge her dead brother, Henrietta disguises herself as the fictitious Lord Harry Monteith, hoping to fool Cavander and challenge him to a duel. Needless to say, her plan does not unfold quite the way she has anticipated.

Henrietta's adventures as a rakehell young gentleman in Regency England will touch and amuse you. She sees the marquess in as many guises as he does her. But the time has come for all pretenses to be stripped away as Henrietta and Jason together track down Damien's real killer and learn in the process how powerful love can be.
The characters of Henrietta and Jason are strong, smart, and vulnerable, each in their own way. I think you'll root for them all the way. Enjoy!