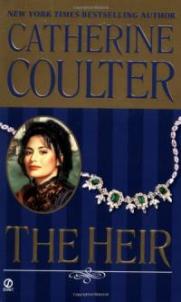 The Heir first appeared as Lord Deverill's Heir all the way back in 1980. I have extensively rewritten this novel, giving it greater scope and depth, but most important are the changes in all the characters. They are now richer and fuller, brimming with life and passion.

Justin Deverill, the new Earl of Strafford, is a military man who's strong, shrewd, stubborn and very possibly one of the most handsome men ever to become an earl. As for his cousin, Arabella, whom he must wed or gain nothing but an empty title, she is more like him than either of them would like to admit. Faced with an order from her father's will to marry this man, she rebels. Since her father is dead, she has no other target except the new earl. However, in him, Arabella meets her match.

These two flamboyant people do wed, despite the fact that Justin believes she has betrayed him before their wedding, and thus, married or not, there is hell to pay.

Who does the earl believe is his wife's lover? There is only one snake in the garden, the young and charming Comte de Trecassis, a relative visiting from France. The earl wants to kill him, but he holds off because he knows the young man came for a reason. The earl wants him to under his eye until he figures out why. He knows he is up to no good; he just doesn't know what the no good is.

Justin and Arabella set off fireworks, both in their anger and in their passion. I hope you enjoy The Heir.