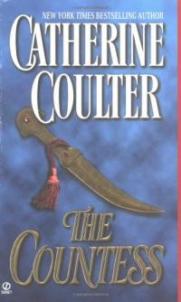 The Countess was my very first novel, published in 1978 under the title The Autumn Countess. Even at that amazingly young age, I still realized that I should write about something I knew. Since I'd grown up reading Georgette Heyer and my master's degree is in nineteenth-century European history, it wasn't much of a mental stretch - a Regency romance. Well, sort of.

As it turned out, The Autumn Countess danced into the bookstores not as a Regency, but as a Gothic masquerading as a Regency.

I've rewritten the novel extensively to make it even more unabashedly Gothic in form, texture, and content, including use of the first-person narration in the classic Gothic style.

Andrea Jameson, unlike the conventional Gothic heroine, isn't a destitute governess. She's young, rich, and toothsome, and adores her Dandie Dinmont terrier, George. However, Andrea doesn't have a single dream of meeting Mr. Right, marrying, and living happily ever after. Go figure.

She strikes a bargain with an older widowed earl who promises her all the razzle-dazzle without the obey part. She's perfectly happy with the deal until she meets the earl's nephew and realizes fairly quickly that she might have made an exceptional blunder.

But she doesn't have much time to ponder her dim-witted choice for husband because someone is trying to kill her. Will she survive to marry the man of her dreams?

I hope you enjoy the inside cover. The art department had a ball designing what they call their "uptown classic Gothic."

Do tell me if you enjoyed the rebirth of my Gothic tale.