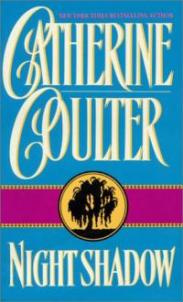 Night Shadow, the second book in the Night Trilogy, originally came out in the summer of 1989. I haven't rewritten it, just cleaned it up and wrapped it in a very nice new cover.

Knight Winthrop, Viscount Castlerosse, first appeared in Night Fire. He is the quintessential Regency bachelor who plans to marry and impregnate his wife just before he croaks, and thus his heir will be raised without the vagaries of his sire.

Yes, Knight is a very happy camper, what with him being the center of the universe. Then the unthinkable happens,. A woman shows up on his doorstep claiming to be the widow of his murdered cousin, Tristan Winthrop. As if that isn't bad enough, with her are his cousin's three children. If that still isn't enough, they are destitute and have nowhere to go. To top it all off, Ugly Arnold is hard on her heels.

What is Knight supposed to do now? Why, he takes them in and bids his former life goodbye. You'll laugh until your belly aches at the antics of Laura Beth, Sam, and Theo. You'll enjoy how the very clever, creative Lord Castlerosse deals with this new species. But how will he deal with his cousin's widow Lily?