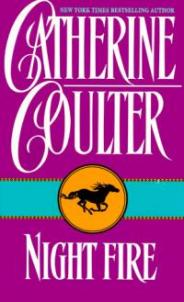 Night Fire, the first of the Night Trilogy, was first published in early 1989. I haven't rewritten it, just cleaned it up a bit and Avon Books has given it a wonderful new cover.

Areille leslie is a sixteen-year-old girl forced to wed Paisley Cochrane, a sadistic old man who abuses her. When he dies, she believes herself free. But she's not.

Burke Drummond, Earl of Ravensworth - a young man she'd worshipped three years before - is home from the wars, and he wants her. When he catches her, he's in for an appalling surprise.

I hope Burke and Arielle are two people who will touch you as deeply as they touched me. They face problems and obstacles never spoken of in Regency times.

If you haven't yet read Night Fire, do give it a try.