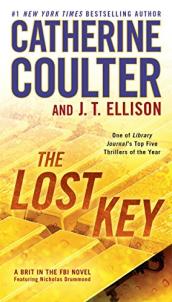 Freshly minted FBI agent Nicholas Drummond is barely out of his Quantico training when he and his partner, Mike Caine, are called to investigate a stabbing on Wall Street.

Their investigation, however, yields more questions than answers. It quickly becomes clear that the victim, John Pearce, was more than the naval historian and antiquities dealer he appeared to be. What Drummond doesn’t know is that buying and selling rare books was Pearce’s cover, and that he had devoted his life to discovering the whereabouts of a missing World War I U-boat concealing a stash of gold bullion, and an unexpected surprise that only raises more questions. When Drummond and Caine find both of Pearce’s adult children have disappeared, the case assumes a new sense of urgency. The FBI agents know their best lead lies in the victim’s cryptic final words—“The key is in the lock.” But what key? What lock?

The search for Adam and Sophia Pearce takes them on an international manhunt, which threatens to run them afoul of an eccentric billionaire industrialist with his own plans not only for the lost gold, but the creation of a weapon unlike anything the world has ever seen.

Here is a fictitious interview with Nicholas Drummond, Mike Caine, and Savich & Sherlock from The Final Cut

Hear a clip from the audio version here...

What in bloody hell have I done?

Nicholas Drummond reported for duty at the FBI's New York headquarters smartly at 7:00 a.m., as instructed. After twenty minutes with human resources, he felt a bit like a schoolboy: stand here, walk there, smile for your photograph, here's your pass, don't lose it. It was worse than the FBI Academy with their strict rules, the uniforms, the endless drills, and more like his training at Hendon Police College with Hamish Penderley and his team.

The administrative realities of moving from new Scotland Yard to the FBI in new York were decidedly less romantic than the initial prospect had been. Months earlier, Dillon Savich, head of the Criminal Apprehension Unit at FBI headquarters in Washington, D.C., had encouraged Nicholas to make a new home in the FBI, and he'd accepted. It was now the end of May, graduation from Quantico and the FBI Academy two weeks in the past, and he was officially an FBI special agent, and technically at the bottom of the food chain.

Twice he'd done this. The first time he'd left the Foreign Office to work for the Metropolitan Police in London. He'd survived those first days and he'd survive these, too.

And even better, you don't have Hamish Penderley to ride you now, making you do tactical drills at 5:00 a.m. Zachery's a different sort. So buck up.

Nicholas knew he should have started out in a small Bureau office in the Midwest, gotten his feet wet, but Dillon Savich had gotten him assigned to the New York Field Office, as promised, working directly for Supervisory Special Agent Milo Zachery, a man Nicholas knew and trusted, with Special Agent Michaela Caine as his partner.

When they at last issued him his service weapon, he felt complete, the heavy weight of the Glock on his hip comforting, familiar.

Freshly laminated and now armed, he'd been walked to the twenty-third floor, led through the maze of the cube farm, and ushered into a small space, blue-walled with some sort of fuzzy fabric, the kind Velcro would adhere to, with a brown slab of wood-grained Formica as a desktop. There was a computer, several hard drives, two file trays labeled IN and OUT, and a chair.

The cubicle was so small he could easily touch each side with his arms outstretched, and that made the tiniest bit of claustrophobia sneak in. He needed more monitors and more shelving and maybe he'd feel at home. Once in the zone on his computers, the close quarters wouldn't be a problem.

He dropped his briefcase on the floor next to the chair, stashed a small black go bag in his bottom drawer, and took a seat. He spun the chair around in a circle, legs drawn up to avoid crashing. Small, yes, but it would do. He didn't plan to spend much time sitting here, anyway. Part of the deal he'd made with Savich meant Nicholas would be working ad hoc with him at times, running forensic point on cases in Washington. From what he'd already experienced working with Savich and Sherlock and Mike Caine, he was in for a ride.

A low, throaty voice said near his ear, "Need a bit of sprucing up, don't you think? How about a nice photo of the queen, front and center?"

Speak of the devil.

"The queen is hanging happily over my bed in my new digs." He bent his head back to see Agent Mike Caine looking down at him, smiling widely. She was wearing her signature black jeans, motorcycle boots, her blond hair pulled back in a ponytail. Her badge hung on a lanyard around her neck, and her black-rimmed reading glasses were tucked in her blouse pocket.

"I wonder why I didn't smell you first." And he leaned up, sniffed. "Ah, there it is, that lovely jasmine, like my mum. Hi, Mike, long time no see."

"Yeah, yeah, all of two weeks since your graduation. So you're all settled in to these new digs of yours? By the way, where are your new digs?"

He didn't want to tell her, didn't want to tell anyone, it was too embarrassing. Fact was, he'd lost a big argument with his grandfather about where he'd lay his head in New York. He shrugged, looked over her shoulder at several agents walking by. "All settled in. A fairly nice bed in an okay place over there---" And he waved his hand vaguely toward the east.

She cocked her head at him, and he said quickly, "You look pretty good after being on your own for four months. When can we get out of here?"

"Champing at the bit for a case already, Special Agent Drummond? You've only been here fifteen minutes. We haven't even had time to go over the coffee schedule and introduce you around. Are we calling you Nick or Nicholas these days?"

"You know what they say about rolling stones and moss. Nicholas will do fine."

She looked at her watch. "You're in luck. We've caught a murder."

He felt a punch of adrenaline. "A murder? Is it terrorism related?"

"I don't think so. I heard about it two minutes ago. Time to get briefed."

Milo Zachery joined them in the hall. In his tailored gray suit, white shirt, and a purple-and-black striped tie, Nicholas thought he looked a lot snazzier than Penderley ever had. Slick clothes, fresh haircut. He looked like a big-dog federal agent all the way to his highly polished wing tips. Nicholas knew Zachery was focused, smart, and willing to let his agents use their brains with only subtle hands on the reins.

"Good to see you, Drummond. I'll handle your briefing myself. Walk with me."

Mike gave him a manic grin, her adrenaline on a level with his, and he was reminded of that night in Paris several months earlier, Mike barely upright, leaning against an overturned couch, bleeding from a gunshot wound to the arm, her face beat up, and smiling. He thanked the good Lord she was here and whole and ready to kick butt.

Nicholas smiled back and gestured for her to go first.

"Such lovely manners from the first Brit on the FBI. I could get used to this."

"Still cheeky, are we? It's good to see that some things haven't changed."

"Come on, you two." Zachery walked them past his office, down the blue-carpeted senior management hallway, straight out the door and to the elevators. As he punched the down button, he said, "You're headed to Twenty-six Wall Street. Stabbing. The NYPD called us since it's on federal land, so it's our case. I thought it would be a good idea to get Drummond here liaising with the locals as soon as possible. And aren't you two lucky, someone managed to get themselves dead on your first morning. Go on down there and figure out what happened."

The elevator doors opened and Zachery waved them in. "Drummond, I know you're going to be our big cyber-crime computer-terrorism guy, but we also need to teach you to drive on the right side of the road, get your boots dirty on the ground first." He smiled and clapped Nicholas on the shoulder. "Glad you're with us, Drummond. Welcome to the FBI. Good hunting." He turned, and said over his shoulder, "Oh, yes. Mike, keep him in line."