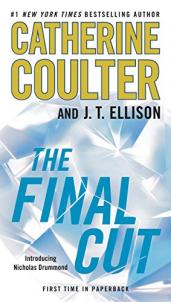 Audio clip for The Final Cut

Nicholas Drummond lived for these moments. His shoulders were relaxed, his hands loose, warm, and ready inside thin leather gloves. He could feel his heart beat a slow, steady cadence, feel the adrenaline shooting so high he could fly. His breath puffed white in the frigid morning air, not unexpected on an early January morning in London. There was nothing like a hostage situation to get one's blood pumping, and he was ready.

He took in the scene as he'd been trained to do, complemented by years of experience: shooters positioned on the roofs in a three-block triangular radius, sirens wailing behind shouts and screams, and a single semiautomatic weapon bursting out an occasional staccato drumbeat. The streets were shut down in all directions. A helicopter's rotor whumped overhead. His team was lined up behind him, waiting for the go signal.

His suspect was thirty yards away, tucked out of sight, ten feet from the left of the entrance to the Victoria Street Underground, and not shy about letting them know his position. He'd been told the guy was a nutter--not a surprise, given he'd been wild-eyed in his demands for money from a second-rate kiosk at dawn. Instead of making a run for it, he'd grabbed a woman and was now holed up, shooting away. Where he had found a semiautomatic weapon, plus enough ammunition to take out Khartoum, Nicholas didn't know. He didn't care about the answer, only wanted this to end peaceably.

At least the hostage hadn't been killed yet. She was a middle-aged woman, now lying on her side maybe six feet from the shooter, trussed up with duct tape. They could see her face, leached of color and terrified. He could imagine her screams of terror if her mouth weren't taped.

No, she wasn't dead. Yet. Which presented a problem--one wrong move and a bullet would go into her head.

Nicholas glanced over his shoulder at his second, Detective Inspector Gareth Scott, tucked against the curb, his expression edgy, a flash of excitement in his eyes. He clutched his Heckler & Koch MP5 against his chest. His Glock 17 was in its shoulder holster.

The suspect stopped firing his weapon, and there was a sudden blessed silence. Nicholas didn't think the guy had run out of bullets. Had the gun jammed? They should be so lucky. What was he thinking? Planning?

Nicholas dropped down beside Gareth. "We have ourselves a crazy. Brief me on the rest."

"We have a photo, taken from the eastern rooftop. It's blurred, but Facial Recognition did their magic. The guy's name is Esposito, out of prison only a month. I guess he woke up real early and decided he needed some excitement in his life and went out on this little rampage."

"We don't know. He took four quid out of the kiosk till, all the guy had at this hour of the morning, and grabbed the woman when the police showed up."

Esposito raised his weapon again and blasted half a dozen bullets into the foggy morning air.

Nicholas saw a brief glimpse of the man's head, but the angle made it impossible for the snipers to take him out. He wouldn't give them permission to fire anyway, not if there was a chance of hitting the woman. He had to make a decision--time was running short.

Nicholas glanced at his watch. 5:16a.m., an ungodly hour in the winter, barely light enough to see. At least it wasn't raining, but clouds were fat and black and overhead. All they needed to make this a real party.

Esposito continued shooting, then stopped mid-blast and shouted, "You stupid coppers back off or she's dead, you hear me? I'll let her go as soon as I'm clear!"

There was return gunfire, and Esposito screamed, "Shoot at me again and I swear I'll kill her. Back off. Back off!"

Nicholas shouted, "We'll back off. Don't hurt the woman."

Esposito's answer was a bullet that flew a couple of feet over Nicholas's head. "Enough," Nicholas said. "Let's get him."

"You want him alive?"

They ducked-walked across the street, then flattened, faces to the ground, just before a fusillade of bullets kicked up gravel two feet away from their earlier position. Gareth cursed. "At least the guy's a lousy shot."

Silence again, except for their fast breaths. Nicholas didn't think Esposito had seen them move. "Keep still and stay down," he whispered. They were only twenty yards downwind now, sheltered by the construction in front of the station's façade. A good spot, though if Esposito moved, turned, he might very well see them and they'd be dead.

Almost as if he knew what they were doing, Esposito grabbed the woman, held her in front of him as a shield and dragged her fifteen feet before pulling her down behind a big metal construction bin. Now Esposito was facing away from them, a good thirty feet from their position. he squatted down behind the bin, leaning around the side to check for threats, ready to fire.

And Nicholas thought, This is surely a gift from the Almighty. He was staring at the bottom of the construction bin. Its base was at least three inches off the ground. He smiled as he smoothly rolled onto his belly and pulled his Glock 17 from his shoulder holster. He aimed at those three precious inches on the underside of the bin, sighting carefully. The guy had big feet in shiny white Nikes, a bull's-eye target if there ever was one.

Nicholas squeezed the trigger. the man yelped and hopped away from the bin, stumbled, and went down hard on the pavement.

"Take him now," Nicholas yelled into his shoulder radio. He jumped to his feet as he spoke. "And do mind his weapon, people."

His team rushed to surround Esposito, who'd fallen five feet from his hiding place behind the bin. He saw them running at him and slammed his weapon to the ground, threw his arm up in surrender, and the standoff was over. And no one was dead, or even badly hurt.

A metallic horn rang out signaling the engagement was over.

Gareth clapped his boss on the shoulder. "Nice one," he said, then called out, "A-Team, to me."

A smattering of applause made Nicholas turn, but before he could holster his Glock, a voice boomed over the loudspeaker. "Detective Chief Inspector Drummond. You have broken the rules of engagement, and are hereby disqualified. Report to me immediately."