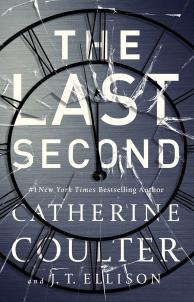 Available in HardCover and Audio March 2019

It’s Bastille Day in France, and the private French space agency Galactus—France’s answer to Space X, owned by the eccentric treasure hunter Jean-Pierre Broussard—has just sent a satellite payload into orbit. Billed as a “communications” satellite, it harbors a frightening reality: a nuclear electromagnetic pulse has been hidden aboard.

In days, when the satellite is in position, Galactus’s head and Broussard’s second in command, Dr. Neveah Patil, will have the power to lay waste to the world with her EMP, and create her own immortality with the Holy Grail––the stones of the heavens and the very treasure Broussard has spent his life searching for.

There was a large mirror on the wall of the white room. Dr. Nevaeh Patel sat in a hard plastic chair, leads from a lie detector machine hooked to her left hand, a thick cord wound around her chest.

She was the one who'd insisted on the lie detector. After the embarrassment of having her mission cut short, being replaced by another astronaut and brought back to Earth, two weeks on the ground of tests, physicals, conversations, polite glances and outright stares, she'd gotten tired of their disbelief and insisted on being tested.

Still, this final indignity was almost too much for her to bear. All she'd done was tell the flight director and flight doctor the truth about what she'd seen during her EVA--extravehicular activity--outside the International Space Station, what she'd heard. It had been real, they had been real, and the powers that be didn't believe her. On board the space station, they'd subjected her to batteries of tests, extensive psychological profiling, concluded she had merely been suffering from zero gravity-induced hallucinations. They rotated her off the ship and grounded her in Houston so they could do it all again.

Which was an affront to everything they claimed to want from their mission -- NASA's ultimate goal was to find planetary life, for heaven's sake. Which she'd done.

The flight director himself, Dr. Franklin Norgate, now sat across from her, a clipboard in his hand. He wore a gray plaid short-sleeved button down and skinny black tie, his normally kind eyes wary. He was as smart as she was, maybe more so. She'd always respected him, seen him as quietly intimidating.

To his right was the examiner, a blank-faced man introduced only as Jim, in his fifties, bald as an egg, a mustard stain on his black tie, like a Rorschach blot. There had been Rorschach tests too, earlier today, and during the innumerable conversations with NASA's psychiatric team over the past two weeks.

What was wrong with them? They were being idiots. Nevaeh had successfully made contact with an alien species. The Numen, they were called, gentle, kind, fascinating beings, and NASA was treating her like she was insane.

Franklin asked, "Are you cold?"

"I'll see if they can make it more comfortable for you." He stared at the mirror, and a moment later, she felt the air conditioning kick off. She nodded her thanks.

The examiner gave her the same strangely empty, polite smile all the other experts had been giving her.

"Good. As I mentioned earlier, only yes or no answers. Are you comfortable?"

"All right then. I'm going to ask you some control questions in order to develop a baseline. Is your name Dr. Nevaeh Patel?"

Silence, scribbling, then, "Did you attend Stanford University."

"Did you study physics and astronomy?"

You received your Ph.D. in astrophysics from MIT?"

"Are you an astronaut?"

"Do you live in Michigan?"

"Are you being truthful with me?"

"Did you speak with an extraterrestrial being on the International Space Station on your last mission?"

A pause. The men shared a glance.

"And did this extraterrestrial being tell you to harm anyone on Earth?"

"Dr. Patel, I must remind you, yes or no answers only."

"Were you paid by a foreign government in the past two years for any services?"

She was starting to sweat now, why, she didn't know. She regretted asking them to turn off the air. "No."

"Did the alien being you spoke with have a foreign accent?"

She had to think for a moment. Were their words accented? Or did they sound very much like her own voice, an echo of something kind and gentle, but in chorus, as if there were hundreds and one, all at the same time? "No."

"Were you stationed on the International Space Station for six months, beginning in October, 2010?"

"Were you the chief science officer on the mission?"

"Did you lose your tether on an EVA outside the ISS?"

"Yes." Her heartbeat spiked, she couldn't help it. She was hurled back to the moment when she knew her life was ended. She clearly saw the tethers breaking, her gloved hand missing the handhold, felt her body flood with adrenaline. She was in space, floating away from the space station. Her jetpack didn't respond. She was so royally screwed, she was dead.

Then the strong, gentle hand caught her, and a hundred melodic voices spoke as one in her mind. " You are not going to die today. But you must tell them we're here."

She shook her head, refocused on the room. It happened so often, her drifting back to the moment the Numen had saved her.

Don't tell them you're still speaking to them.

The examiner was watching her closely. "Did you encounter an extraterrestrial being on this EVA?"

"Did you speak with this alien?"

"Did the alien tell you to come back to Earth and tell us of its existence?"

"And the alien then restored your tether and lead you back to your port so you could rejoin the crew."

"Are you thirty-seven of age?"

"Do you have blond hair?"

"Do you believe extraterrestrials are trying to communicate with us?"

Silence. More scratching, then the man nodded and the machine's lights went off.

"Thank you. We'll unhook you now."

Norgate said, not unkindly, "You can wait in the hall."

She started to speak, then shook her head and left the room. They thought she was crazy, she'd gone off the deep end, and couldn't be trusted. Space madness. Hallucinations in a stressful moment. They weren't going to believe her, no matter what she said, no matter what the machine indicated. She could see it in their eyes.

She went to the hallway as instructed. She was good at following orders, it was one of the reasons NASA recruited her in the first place. Brilliant, compliant Nevaeh. So respected for her leadership, so adored by her peers.

She knew everything was about to change.