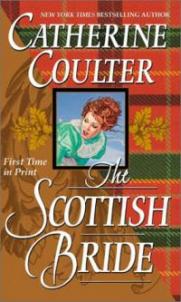 All the Sherbrooke clan are alive, well and in rip-roaring spirits in August of 1815. Two months after Napoleon’s defeat at Waterloo, Tysen Sherbrooke, the youngest of the three brothers, now thirty-one years old, a vicar, a widower, and the father of three children, has just been told by the earl that he’s become the new Baron Barthwick of Kildrummy Castle in Scotland.

Tysen feels it is his duty to visit his new holdings. His ten-year-old daughter, Meggie, insists she should accompany him. Tysen refuses, but Meggie is blessed with a full measure of Sherbrooke resolve, and a wily plan of action.

Devout, thoughtful, honorable to his soul, Tysen’s narrow, sober would world explodes when he steps into a bee-hive of complications--facing down dreadful people who would as willingly slit his English throat as look at him. Then the Local Bastard, Mary Rose Fordyce, a remarkable young woman blessed with a soft, steady heart and a courageous spirit, comes unexpectedly into his life, in desperate need of his protection.

This is the fourth and final book in the Bride series, and I like it the best of all. Tell me what you think.