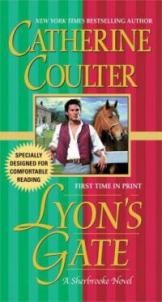 Five years after Jason Sherbrooke leaves England for Baltimore and the Wyndhams (The Valentine Legacy), one of the premiere racing families in the area, he wakes up early one morning with Horace’s ugly pug face staring him down, and knows it’s time for him to go home.

Jason wants to breed and race horses, primarily his own thoroughbred Dodger, who’s faster than a Baltimore pickpocket. When his twin James takes him to Lyon’s Gate, a once-renowned racing stud farm near his family’s home, Jason knows to his soul that this property is what he wants more than anything.

Unfortunately, Hallie Carrick (Night Storm) wants Lyon’s Gate just as badly as Jason, and she’s fully prepared to fight him down and dirty to get it.

New life and fate take a hand, and the two of them end up with something neither expected.

Come to Lyon’s Gate in 1835 England, visit with the Sherbrookes, and see Jason come back to the fullness and joy of life.