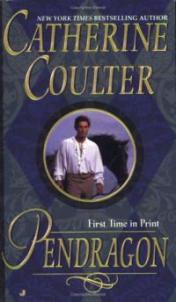 It’s time fort a bit of cat racing, a sinister mystery, and a light touch of gothic menace. Add the signature Sherbrooke grit and wit and voila, you have Pendragon. Here’s to the next generation - Tysen Sherbrooke now has four sons and Meggie, age nineteen. Her almost-cousin Jeremy Stanton-Greville - Sophia Sherbrooke’s brother, and the man Meggie has held in silent adoration since she was thirteen years old - unknowingly breaks her guileless heart. Deeply depressed, she rallies with a hasty marriage to Thomas Malcombe, the earl of Lancaster and a brand-new card in the Sherbrooke deck, in the spring of 1824, despite a very nasty rumor involving a local girl.

Thomas takes his bride to Pendragon, a castle on the southeastern coast of Ireland. A monstrous old place, filled with very eccentric folk, Pendragon nonetheless charms Meggie, until she discovers that she’s there for a reason that could lead to disaster.

I hope you like Meggie Sherbrooke’s story and getting together with the Sherbrooke clan again.