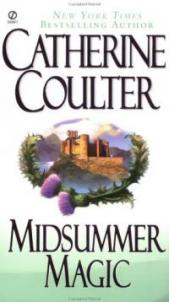 Midsummer Magic, the first novel in the Magic Trilogy, was published at the end of 1987. Now, eleven years later, we're reissuing the trilogy with brand-new clothes. I haven't done any rewriting, as this novel is just dandy the way it is.

Philip Hawksbury, the Earl of Rothermere, obeying his father's dying wish, hies himself to Scotland to offer for one of the daughters of Alexander Kilbracken, the Earl of Ruthven.

Frances Kilbracken, informed of the earl's arrival and his mission, disguises herself as a bespectacled dowd so she won't be the one selected by the young earl. But choose her he does, and for all the wrong reasons.

The newly married couple return to England, together but not at all happy. Philip dumps Frances at Desborough Hall, his ancestral estate, and heads back to his old life in London. Ah, but Desborough has a stud farm and racing stable, and Frances is magic with horses.

When the earl returns to his home, driven by guilt, he discovers the woman he married has grossly deceived him. What follows is a battle of the sexes that will have you chuckling, maybe even howling with laughter.

Let me know what you think of this first of the Magic novels - it's one of my own favorites.