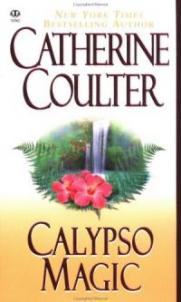 Calypso Magic, the second novel in the Magic Trilogy, was published in 1988. I haven't done any rewriting; the novel's just wearing beautiful new clothes.

It is 1813 in London. The Earl of Saint Leven, Lyonel Ashton, doesn't like women, and he's got every reason not to. But fate, in the guise of Aunt Lucia, intervenes. She presents him with Diana Savarol, a young lady newly arrived from her family's Caribbean island and very unhappy at being forced into frigid England and tossed headlong into the marriage market.

These two very strong willed individuals eye each other, then go for the gold in an insult competition. The earl calls Diana an eavesdropper; she says he looks pale and unhealthy. He says she has big feet; she says he suffers from "Charlotte's Disease."

When Diana insists upon returning home, she doesn't expect to have the earl share her cabin aboard ship. Then there's the ship's captain, Rafael Carstairs, who isn't just any ship captain sailing the seven seas. And on Savarol Island, there's a mystery to solve and wrongs to right.

Do enjoy Lyonel and Diana, and let me know what you think of their story.