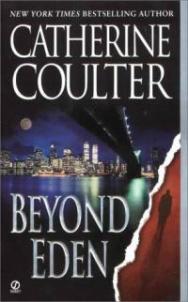 The sirens were shrill. They pounded into her head. She hated them. She wanted to get away from them but she couldn't seem to move. Someone was squeezing her hand, she felt his fingers suddenly, warm fingers, blunt. A man was speaking softly and gently to her, but he was insistent, he wouldn't stop. He was like the sirens. She wanted to tell him to be quiet, but she couldn't seem to get the words to form in her mind. She didn't at first understand what he was saying, but she recognized the pattern, the repetition, and despite herself, she began to pay attention to him, looking to his voice to force her outward toward him.

She opened her eyes. No, just her left eye. Her right eye wouldn't move. It was strange that it wouldn't, but it was so. He was very close to her. He was young and there was a sparse mustache on his upper lip. His eyes were very blue and his ears were big. She thought he was Irish. She realized then she couldn't breathe.

She gasped for breath and the pain seared through her. There was only pain, no air.

"It's all right. I know you're having trouble. Just take real shallow breaths. No, no, don't panic. Shallow breaths. Yes, that's right. I think you've got a collapsed lung. That's why we've got that oxygen mask over your face. Just breathe, shallow and easy. Good. Now, do you know who you are?"

It was hard to breathe even with the shallow breaths. She focused on the mask that covered her nose and mouth. But it hurt so much. She kept trying, and she got air, but the pain nearly sent her into madness. He asked her again who she was. Stupid question. She was her, and she was here, and she didn't know what was going on, what had happened, except she was hurt and could barely breathe.

"Do you know your name? Please, tell me. Who are you? Do you know who you are?"

"Yes," she said, just wanting him to be quiet. "I'm Lindsay." God, it hurt to say those words, hurt so much she wanted to yell with it, but she couldn't. She whimpered, fear sharpening the sound, and the man said quickly, his voice calm and low, "Just take shallow breaths. Don't try to do anything else. Just breathe, that's all you have to do. Do you understand me? That's an oxygen mask over your face to help you. Don't fight it; let it help you. We think you've got a collapsed lung. That's why it hurts so much. But you've got to stay awake and pay attention, all right?"

God, it hurt so much. She tried to hold her breath, to stave off the horrible jabbing pain, but that didn't work wither. He was speaking to her again. Why had he repeated the same thing? Did he think she was stupid?

"I know you hurt, but hang in there. We're nearly to the hospital and they're waiting for you. Don't worry. Just keep taking those little breaths. I'm glad to meet you, Lindsay. I'm Gene. Just lie still. We'll be at the hospital very soon now. No, don't try to move."

"What happened?" It hurt so much to speak. And talking through the white plastic mask made her feel like she speaking from a long way away.

"There was some sort of explosion and you were hit by falling debris."

"Am I going to die-collapsed lung?"

"There were many screams."

"No one else was hurt, but everyone was scared. You were standing right next to that fake rigging when it blew. Tell me again. Who are you?"

"I was there because I'm Eden."

He frowned, but she didn't see it. It hurt too much and she didn't want him to see her lose control. She turned her head away from him. The pain continued. She'd never imagined before how it would feel not to be able to breathe. For every small intake there was so much pain that her whole body shook with it. She closed her eyes and concentrated on holding on.

"She's doing fine, at least I hope to God she is. The pain's bad, but she's hanging in there." He turned away from the driver to her. "I'm sorry, Eden, but we can't give you anything for the pain yet. The trauma team has to check you out first. Just hold on, hold on. Squeeze my fingers, think about my fingers and squeeze when you hurt real bad. We're almost there, almost there." Gene wondered if Taylor was her husband. Dear God, the man would be in for a shock when he saw his wife. She was a model. He looked at the right side of her face. It was difficult to tell how bad it was smashed because of all the blood. He held her hand more tightly. Gene O'Mallory wanted her to be all right. He wanted it very much.

She eased away from the man then, pulling back to avoid the pain, pulling deeper and deeper into her mind. Her mind could breathe for her, breathe, slowly and in shallow jerks. No, no, it was from her chest that those paltry breaths came, her heaving chest that felt blistered raw, as if by a great fire, and that strange hissing was from the plastic cup over her nose and mouth, and it hurt so very much. The pain kept tugging at her. She retreated until she felt the blackness come into her, pushing her even farther, sweet blackness that eased the awful pain. And she let the past float into her, all her thinking directed inward, and it was odd, but she saw the face of that reporter--Kettering was her name-and how she'd seen her at the funeral and what she's said, how sorry she'd been about Grandmother.

She went deeper, pulling her memories with her, pushing, always pushing at the pain. She saw the pathetic girl, so unsure of herself, so very clumsy, tall and skinny, all bony knees and elbows, so ugly, there with them, yet not a part of them, just there, watching, wishing somehow that she could belong, feeling the endless pain of it. But she couldn't belong; and she never had.