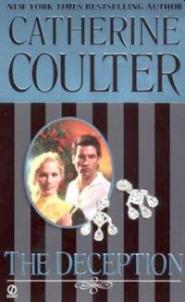 The Deception first appeared in April 1983 as a Signet Regency with the title An Intimate Deception. I've completely rewritten the story so that it's now a full-bodied historical romance. It has a brand-new beginning and a brand-new ending, and I've improved everything in-between to make it richer, bolder, more fun, and more adventurous.

The Duke of Portsmouth offers an impecunious half-French relative a job as his young son's nanny. What he quickly discovers is that he wants her, badly. What he discovers far more slowly is that she isn't at all what she seems.

Evangeline de Beauchamps is in way over her head. She has far more to cope with than a nineteen-year-old virgin should ever have. To top it all off, she must play an experienced widow with a man who knows women as well as he knows his horses, or so he thinks.

You'll see Phillip and Sabrina Mercerault from The Offer and hear more about the famous cat races of southern England.