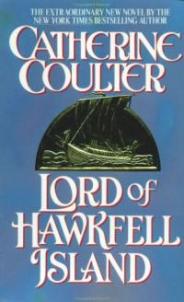 Rorik is a Viking warrior, as fierce and savage as the North Sea during the winter solstice. Mirana is a Viking woman who loves birds, is more ingenious than most men, and loyal down to her toes. Her life changes utterly one fateful day when Rorik and his men come to Clontarf, a Viking fortress on the eastern coast of Ireland, to kill her half-brother. But she is the one taken as a hostage to use as a pawn against him.

Rorik is the Lord of Hawkfell, an island off the east coast of Britain. The moment he brings his captive home, it seems that everything begins to fly out of his control. The women are out to teach the men a lesson with the result that the food is rank, Rorik's family is out for Mirana's blood, a murderer is on the loose, and a huge mongrel, Kerzog, dotes not only on his master but also on his master's captive.

Rorik and Mirana are two strong-willed people, ardent in their opinions, who will have you rooting for both of them equally.
You will also discover who really rules Hawkfell Island. Please enjoy.