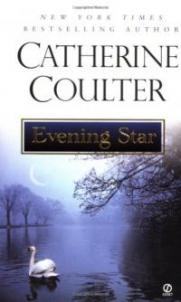 Evening Star, formerly titled Sweet Surrender, first appeared in 1985. Now this novel is where it belongs - it's the first book in what has become the Star Quartet. In Midnight Star, the first book in the former Star Trilogy, you met Delaney Saxton in San Francisco in 1851. Evening Star features his older brother, Alex Saxton, with Delaney making a cameo appearance.
Giana Van Cleve, the heroine, has fallen in love with a vicious fortune hunter. Her mother, the renowned shipowner and builder Aurora Van Cleve, is desperate to save her daughter. She agrees to support Giana's wedding if Giana agrees first to spend an unusual three months in Rome with her Uncle Daniele.

But Giana's uncle takes this bargain far beyond what Aurora ever imagined.

Thus, Giana first sees Alex Saxton not in a society drawing room but in a brothel. The next time she sees him, she is one of the virgins to be sold to the highest bidder at the infamous Roman Flower Auction. He wins the bid and her, but not for long.

Four years later, when Alex meets Giana again in London, she has become a woman intent on success in a man's world. Alexis set on revenge - he will have her and nothing will stop him.

Would you make Giana's bargain with Daniele? Would you keep the bargain? Agree to be part of the Roman Flower Auction? Let me know-